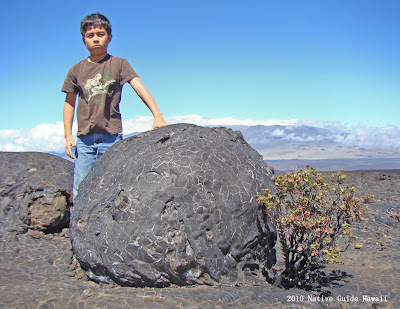 During a volcanic eruption, magma migrates to the surface. This magma, now called lava, is preceded by a mixture of magmatic gasses, which can cause explosive events. In this photo, taken on the slopes of Mauna Loa volcano, on the island of Hawaii, large rocks were blown out of an eruptive vent. These rocks were then coated by some rather fluid lava, creating a rounded appearance.
Photo: Warren Costa
Posted by Native Guide Hawaii at Friday, May 21, 2010 4 comments: Links to this post

Here is a short video about my tours done by videographer Layne Luna for a local television show.
Posted by Native Guide Hawaii at Sunday, May 02, 2010 1 comment: Links to this post